Fully automated inventory control without human intervention and perfect data collection in your system the next day: this is how sensitive markets, such as those with food or medicines, are assessed as a crucial step. Improved data quality helps prevent frequent production interruptions.

FIEGE is already one step ahead in what remains a vision for most human-only warehouses. The company, funded by the EU and the Bundesverband Deutsche Startups, develops logistics solutions for inventorying drones. A drone named inventAIRy XL flew over the FIEGE warehouse for three days to test its rotors. And the result was very satisfactory. FIEGE management is in favor of the idea of ​​a drone inventory, which he started experimentally.

A live test of the first generation of drones in one of the 3PL logistics centers was considered as early as 2018, but at that time the technology had not yet fully matured to FIEGE standards. The multicopter could only fly for very short periods of time, and users had to move the rotorcraft manually from one aisle to another.

However, technological progress has taken place since then. The decisive novelty of the present is the ground unit, which in the meantime managed to connect with the drone of the inventAIR XL. The small Automated Guided Vehicle (AGV) evokes images of the R2D2 droid known from Star Wars movies, which is similarly multi-talented. The intelligent system includes a battery that powers the drone via a cable connection, allowing it to fly for up to five hours. An innovation of this kind has hit the right nerves by combining a drone with AGV technology and offers users significant benefits. This fact convinced the FIEGE innovation team. 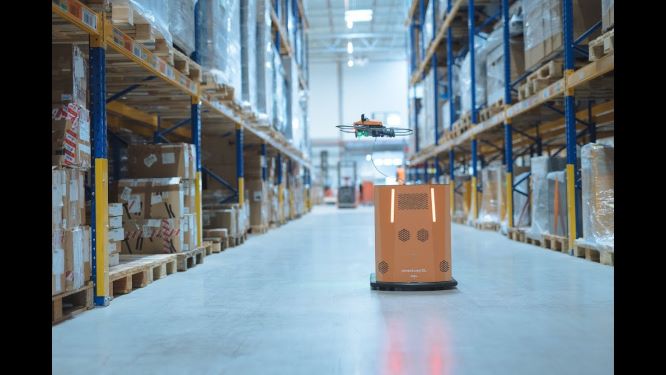 The new concept looks like this: The inventory of a warehouse in Emmerich with 30,000 pallet places requires only three workers per one job change at a given place. However, they only intervene in case of emergency. The drone can do the real work all by itself. The inventAIRy XL barcode reader provides the necessary information from pallet labels. The data is immediately processed and compared with the preliminary inventory levels from the warehouse management system.

Then a high-resolution image from the integrated 20-megapixel camera comes into play. The goal was challenging: Fully automate and ensure at least 95% of the warehouse with a flawless inventory. Any discrepancies were systematically and gradually removed through photographs from the drone. The testing team expected incorrectly affixed or covered labels on an error on approximately one percent of the pallets to produce error messages. Furthermore, the project team assumed that about 0.1% of the pallets could not be read for torn labels. In these cases, the drone flies over the area again and checks the situation twice.

Regular inventory and design checks were eventually performed according to strict hygiene protocols after being postponed several times due to the Covid-19 pandemic. The test result from the Emmerich warehouse exceeded expectations. Fiege has acquired valuable information that will still need to be analyzed. The excellent end result presupposes a promising perspective towards the inventory of stocks using drones.