A logistics complex will be created near the Čierny les

The Čierny les is a relatively unknown name for a large part of Bratislava residents (especially those who have never been towed). However, the location near Slovnaft is currently undergoing a major change - the R7 Expressway is being built here. After its completion, the further transformation of the site can be expected, but not in the form of a residential area, but rather a logistics area. The first project is already in preparation.

Despite the name, the Black Forest has not been a forest for a long time. The surrounding area was used for agricultural purposes for a long time, but in the post-war period, there were significant changes in connection with the straightening of the Little Danube and the construction of the Slovnaft refinery. The grove, the remains of which are still here, is actually the remnant of an island, delimited by the arm and later the dead arm of the Danube. The Court of Technical Services has been located here for a long time, but it has been inactive for several years. Cars were towed here.

The emergence of the R7 Expressway is a fundamental change, the most significant in recent decades. The overlooked area, where most investments would have been unattractive before, is suddenly becoming extremely well accessible, especially in terms of transit and logistics. In addition to the proximity of the expressway and the highway (D1 and D4), the location will have good connections with the port, railway and airport. These advantages have been noticed by the developers of logistics centers, as a result of which the first of the projects is close to implementation.

In the area, bounded on the south by the area of ​​the Little Danube (including the dam), on the west by a railway siding leading to Slovnaft, on the north by Slovnaft Street and on the east by an agricultural area, four halls should be built. However, in accordance with the Spatial Plan, the territory is divided into two areas. The southern one should serve for the benefit of distribution centers, warehouses or construction, while the northern one is intended for civic amenities of urban and suburban importance. In addition to logistics halls, the developer, Immolease, will also set up retail boxes with trade and exhibition spaces, ie showrooms.

A pair of large halls (BCR1 and BCR2) will be used in accordance with the documentation for storage, easy production, or. assembly (of cars or appliances) and for the handling of goods to the extent following the storage of goods. Ordinary consumer goods, substances and components should be stored here, so dangerous goods should not be placed here. In addition to presentation spaces, the showrooms will also contain related equipment, ie offices and warehouses. The total usable area of ​​all buildings will be almost 63,000 square meters, of which logistics halls account for approximately 50,000 square meters. There should be 450 parking spaces for cars and 23 for trucks. They will all be in the field.

Although the developer is Immolease, according to YIM.BA, the operator could be CTP, one of the major players in the logistics market. It paid more attention to development than is standard for projects of a similar type. The area should thus meet the conditions for certification in the BREEAM system, showrooms will have green roofs in one of the project variants (recommended) and rainwater will be drained into infiltration tanks. The documentation recalls that the project will remove the environmental burden that is here today. The area will be accessible by public transport, the stop already exists today.

The project has a final EIA opinion, which recommends the construction of the site, although under certain conditions. These include, for example, planting mature trees, adapting the stops to the Capital City's concept of developing public transport, building a two-meter two-way cycle route, widening sidewalks to 2-4 meters or respecting the space reserve for the tram line along Slovnaftská. The designer of the construction is the company JFcon, the estimated cost is 6 million euros. Implementation is expected between 2021-2022. 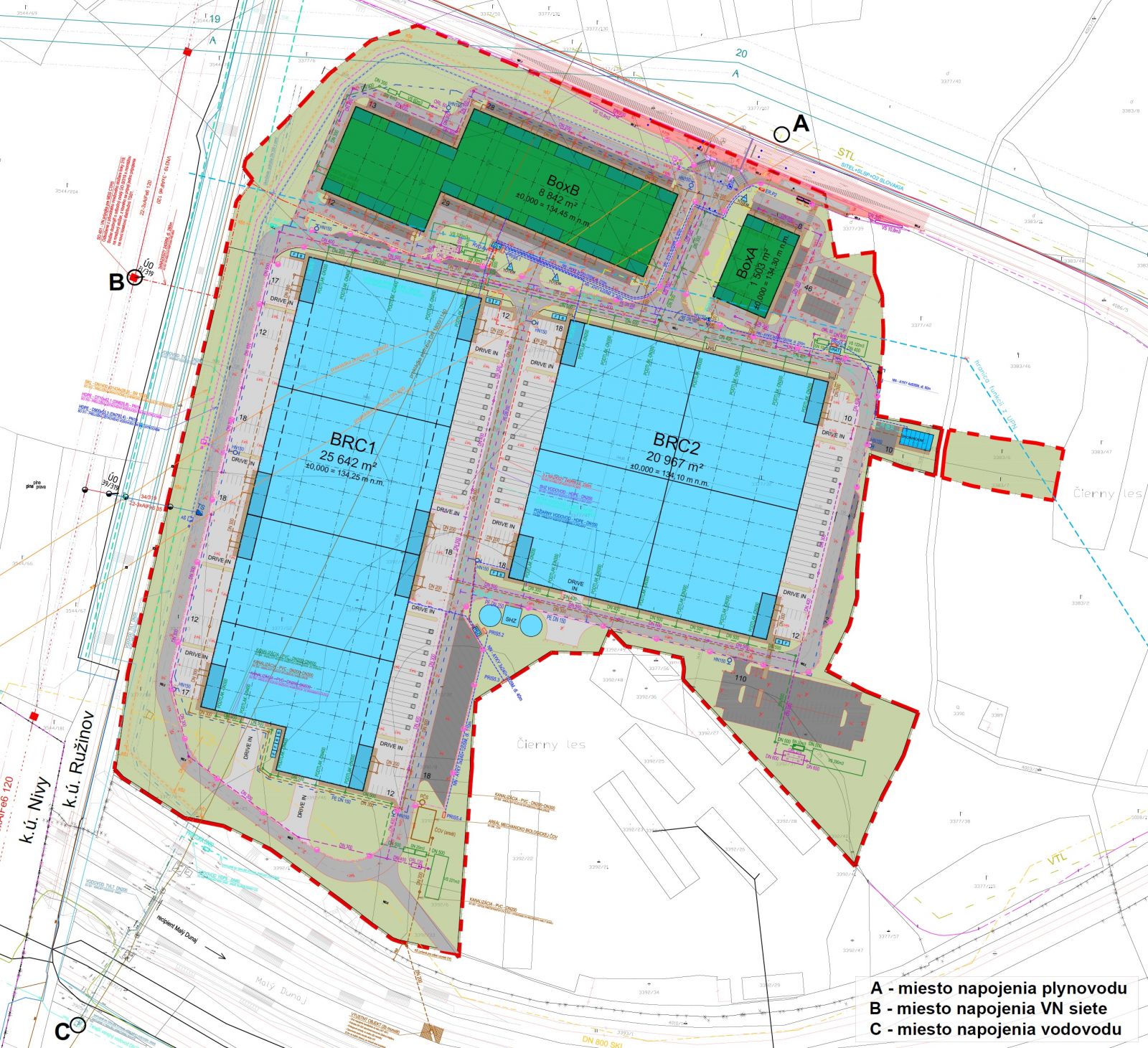 Variant 2 of the design of a logistics complex with a green roof of retail boxes. Source: Immolease / EIA

The construction of a large logistics complex in this part of Bratislava may seem incorrect in the context of gradually being prepared projects in the area between Ružinov and Slovnaft. Step by step, the Nový Ružinov complex is growing on the western edge of Domové rolí and Páleniska, and Domové role, Sedmokrásky or Vlčie Maky are being prepared. The vision of turning today's fields into residential development did not seem distant. In reality, however, it is not realistic today, because the Territorial Plan of the Capital City of the Slovak Republic, Bratislava, is against it.

A look at the Spatial Plan shows that although new housing estates may actually be created here in some localities, their neighbors will be storage and distribution centers and civic amenities in the vicinity of Slovnaftská Street. The warehouses will fill mainly the now undeveloped areas adjacent to the mentioned siding, but also the surroundings of Slovnaftská with direct access to the expressway. Other areas are to a lesser extent formed by the functions of mixed areas of housing and civic amenities and to a greater extent by mixed areas of trade, production and non-production services. In translation - there will be little housing here, in addition to warehouses, shopping centers, showrooms, retail boxes, to lesser extent office files and the like should dominate.

The presented project is thus completely in order from the point of view of the plan, regardless of the aesthetic criteria or the need for Bratislava to expand the areas for housing. The only thing that can be done is to push for certain environmental measures, such as green roofs - and this has been achieved here. However, it is unrealistic to imagine a new nice neighborhood here, and it can be assumed that this will be the case for several more decades. Such a development comes at a time when there is talk of the possibility of building a tram line, which would make the site, just a few kilometers from downtown, ideal for the emergence of a residential area with houses of low scale but higher density.

The new development also comes at a time when the discussion about the possible relocation of the Slovnaft refinery in the next decades is starting to open very carefully. The decision to locate a refinery in the area, at the beginning of Rye Island and in close contact with the capital, was clearly wrong, even stupid. Its consequences were felt by the inhabitants of the Danube Bishops in the 1970s when an ecological accident led to a large and long-lasting outage of drinking water. Although demands for environmental protection have increased radically since then, Slovnaft is a potential threat and barrier to city development.

An open debate about his future in the context of the metropolis is therefore entirely appropriate. Moving the refinery to another, more suitable location outside Bratislava should be one of the alternatives. If something like this succeeds, and the whole area, after clean-up, is opened for development (this land is probably not suitable for agricultural production), it could be a catalyst for the development of the city. At the same time, it would be a great help for Bratislava, which is facing and will continue to face a shortage of new flats and poor housing affordability.

Until then, however, these potentially suitable areas will be surrounded by logistics centers, warehouses, light manufacturing and shopping galleries. The fate of several areas near new motorways and the expressway is likely to be similar, which shows that their creation may help alleviate the (temporary) traffic situation, but at the same time create new problems. Unfortunately, one of the few tools that could have avoided these complications - the Bratislava zoning plan - rather helps them. The zoning plan thus confirms that it is a problem in itself.

For the first time, 1 billion EUR was reinvested in the commercial real estate market in Slovakia